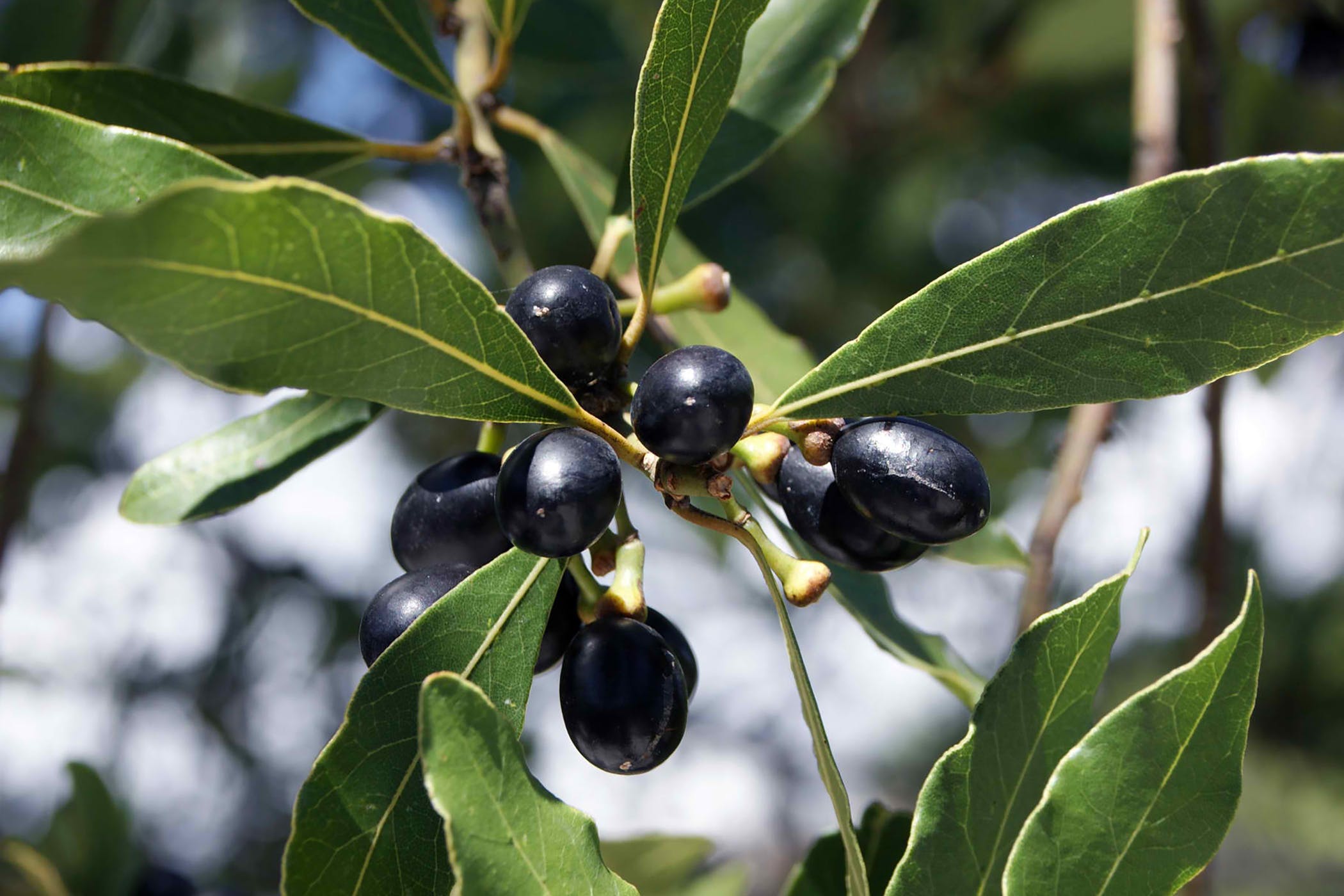 Laurel, daphni, bay, and laurus Nobilis are all names given to the same tree whose small dark berries release a potent oil which was commonly used in ancient Greek and Arabic medicine as a natural disinfectant thanks to its anti-bacterial and anti-inflammatory properties. Later humanity began distilling oils to produce medical alcohol as we know it today.

The laurel tree can be found throughout the Mediterranean, colonizing coastal shores and bringing together the essence of the sun and salt with its rich, eucalyptus-fresh fragrance. Not only does laurel add flavor to soups, but it has also been recognized and used as a strong medicinal plant for thousands of years. Its oil promotes circulation and is an anti-inflammatory agent.

Since the dawn of civilization, laurel has been perceived as a “noble” plant and its oil as a “magic” oil. Old stories speak the glories of famous women, like Cleopatra and Queen Zenobia, who used laurel oil to keep their hairy shiny and how laurel leaf smoke was used to enhance magic formulas and purify the body. The laurel tree has been admired since antiquity, occupying a semi-mystical position in Greek life and mythology. And, as at the end of battles, a laurel leaf was placed on the brow of the winner of the Olympic Games as a symbol of victory and glory, which gave origin to the expression “winning one’s laurels”. Not only athletes and warriors were worthy of laurel. Laurel was also placed on the heads of poets and even Zeus, the chief Greek god, was always crowned with laurel. Those are just a few examples among many demonstrating the importance of the plant. As a modern example, the word “baccalaureate” (from which bachelor derives) means “laurel berry”.

The burning of laurel leaves was commonly thought to purify, bless, and protect spaces from negative influences — a practice that can still be observed during religious and spiritual occasions today. Bay, as laurel is also known, was generally thought to sharpen the mind, however, excessive use could cause changes of consciousness. Moreover, the Oracle of Delphi, sitting in her sanctum, would munch a few leaves before she began to give her prophecies.

Today, it is known that laurel has a strong anti-inflammatory effect and that its fragrance is concentration-enhancing. It is also said to promote patience and self-control and is, therefore, known as a “diplomatic agent”.

Bay leaves are also a common flavoring, especially in Mediterranean cuisine, where it is used in soups, stews, sauces, pickles, and many fish dishes. French cooking cannot be conceived of without a trace of laurel, which is also one of the main ingredients in the “bouquet garni”.

Leaves and berries of the wild-grown plant have been chiefly used in the past and are still used today is dried form or processed into an oil.

THE ORIGIN OF THE BAY TREE

Western Asia is pinpointed as the origin of this evergreen plant. From there it spread throughout the entire Mediterranean region and to other parts of Europe. This shrub is also found in the mountainous north-west of North American, where it found its home in parts of the the moist forests.

It is unclear where its botanical name, Laurus, comes from, but its name in ancient Greek, “daphne”, shows a clear connection to the mth of the nymph, Daphne, who turns into a bay tree. The nymph begs her father to transform her body, which he then enchants into a tree. The reason for her request is to escape continuous harassment from Apollo who has fallen in desperate love with her after being struck by Eros’ (Cupid’s) arrow. After Daphne turned into a laurel, Apollo, filled with grief, began to wear a wreath of bay leaves as a sign of his unrequited love.

This legend has produced some of the finest Greek sculptures of the nymph, being half laurel. Additionally, the names give to the bay tree in Hebrew, Turkish, Albanian, Bulgarian and Romanian are notably similar to the name used in old and new Greek (“daphne”/”dafni”) and thus all make reference to the Greek myth about this nymph.

The laurel shrub thrives best in lime and nutrient-rich soil; preferring a sunny spot to grow, but being sensitive to strong winds and frost.

Under natural conditions, the plant may grow to be 12m high and 10m wide. Its leaves are hard, leathery and curled at the edge. When the leaves are rubbed or broken they give off a fragrance that is particular to the laurel.

The laurel is a dioecious plant, meaning that each plant has only female or only male flowers. It blooms in spring, often around mid-April and has white to yellowish blossoms. However, berries are produced exclusively by female plants. The olive-like fruit grows in clusters, is black to blue in colour with one large pit in the center, and is harvested in autumn (November to mid-December). Since only the female plants produce berries, the yield of fruit is quite low.

THE PRODUCTION OF LAUREL OIL

Laurel oil (oleum lauri) is made from the berries of the female shrub. The process of oil extraction is complicated and done by hand, following a traditional procedure that has been passed down from one generation to the next.

The first step is to harvest the berries from the wild shrubs by hand. In order to release the precious oil, which is hidden in the fruit’s pit, the berries are heated in a very small amount of water — as little as possible–. This heating causes the pits shell to break so that the oil is set free. This particular moment can be recognized due to the sound made by the pits splitting open. In order to collect the laurel oil, a large amount of water has to be added to the berries right as the oil is released. The recently released laurel oil settles on the surface of the water from which it is collected. The oil has a thick texture and is dark green to brown in colour.

The yields are not very high with 10kg of fruit producing only 600-1000 ml of oil. This is what increases the value of laurel oil.

Laurel oil has an intense fragrance that is reminiscent of eucalyptus.  It has various effects on the human body including stimulation of blood circulation and wound healing, in addition to its exhilarant, anticonvulsant, digestive and diuretic properties.

Due to its olfactory intensity, it is also used as a repellent against insects and some parasites. Additionally, the oil is used to free the airways and strengthen the immune system.

The purifying effect, which has been attributed to laurel oil for thousands of years, still holds true today. The natural oil is said to have a strong antiseptic effect and is often used in cases of fungal infection and superficial inflammation. Even eczema can be treated with this noble oil that cleans and heals the damaged skin in a natural way.

Laurel oil is also used for medicinal purposes. It can be found in use for bruises, sprains, hematomas and rheumatic issues. Also, it is very helpful for aching joints and muscles.

Moreover, laurel oil has a notable impact when used as an ingredient in cosmetics with which hyperfunction of the sebaceous glands can be regulated. Thanks to its balancing character as well as its anti-inflammatory abilities, laurel oil helps treat blemished skin and acne.  Dandruff may also be diminished by the inhibition of sebum overproduction. Additionally, the oil’s general enhancement of blood circulation acts positively on dandruff reduction.

The bay tree is glorious and extensive in its applications. With its versatile benefits, it is an old-fashioned, yet undoubtedly modern personal care product. Indulge and crown your body with laurel for a healthy and nourishing experience.

The Greek and Roman warriors used to rub their wounds and injuries in battles with laurel branches to cleanse them and insure that they would not become inflamed. Afterwards when the battle had reached its end, the surviving warriors would twist their laurel branch and place it over their heads for the journey home to their loved ones. From there the laurel branch became a sign of victory, glory, health, and eventually it became the symbol for the Olympic games. This origin inspired us here at Noble to incorporate the laurel branch as part of our logo as a sign of authentic natural health and beauty

Read more about the Daphni and Apolo Myth

0
Select the fields to be shown. Others will be hidden. Drag and drop to rearrange the order.
Click outside to hide the compare bar
Compare